A law banning smoking in vehicles carrying children has come into force in England and Wales. 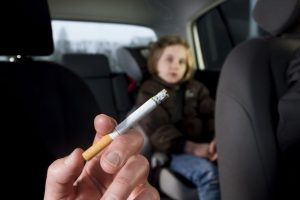 Drivers and passengers who break the law could face a penalty fine of £50 – but police say they will take a non-confrontational approach initially.

Whenever an under-18 is in the car, smokers will still be liable even if the windows are down or sunroof open.

But the law will not apply to people who are driving in a convertible which has the roof down. Nor does it apply to e-cigarettes.

The Scottish Parliament is expected to consider bringing in its own law banning smoking in cars carrying children next year.

Meanwhile, officials in Northern Ireland said they would look at how the ban is working elsewhere before deciding whether or not to follow suit.

More than 430,000 children are exposed to second-hand smoke in cars each week, according to the British Lung Foundation.

Will the new law work?

The acknowledgement by the police that there will be a light-touch approach to the smoking ban in cars has raised some eyebrows.

But this was always likely to be the case. In fact, the same approach was taken when the smoking ban in enclosed public places – bars, restaurants and clubs – was introduced in 2007.

It was not made a priority by police or council officials, but the fact it was the law changed attitudes and behaviour.

And that is the point. Like other laws, the aim of this one is public protection – from second-hand smoke. But there is also a wider ambition too: to make smoking socially unacceptable.

Steve White, chairman of the Police Federation, said it would be “extremely challenging” to enforce the ban.

A National Police Chiefs’ Council spokeswoman said: “Police forces will be taking an educational, advisory and non-confrontational approach when enforcing the new legislation. This would see people being given warnings rather than being issued with fines, which would give time for public awareness of the offences to build.”

For all your vehicle’s repairs and servicing needs consider AMS – call us on 01934 824551 to discuss your vehicle.

Research suggests regular MOT is safety-critical for many

DPF removals slammed as study reveals shocking reality
Scroll to top
We use cookies to ensure that we give you the best experience on our website. If you continue to use this site we will assume that you are happy with it.Ok