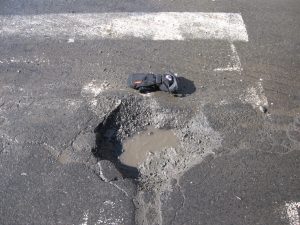 There were also ten per cent more occurences of damaged wishbones and a ten per cent rise in problems with vehicle subframes.

What it means for you

Potholes begin forming in the winter when rain water seeps in to cracks in the road and freezes, weakening the surface until it finally disintegrates and becomes a pothole. Industry figures show suspension and steering repairs increase by around 75 per cent during the warmer months of February, March and April compared to December.

“It is very worrying that our patrols have dealt with more pothole-related breakdowns in 2015 than they did the year before because we did not experience a particularly cold winter in either year.”

The worst offending roads are in East Anglia with 4,547 pothole-related callouts, but only ranked third across the UK in terms of percentage increase of these faults with 31 per cent.

The South East was the worst region overall with a 62 per cent rise as a result of 2,686 incidents.

A report published in November 2015 showed that the UK has more than 31,000 potholes on the waiting list for repair, comprising almost 12,000 miles of roads.

In his Autumn statement, Chancellor George Osborne stated that a £250 million fund had been ringfenced for pothole repairs over the next five years but experts say that it is simply not enough.

If you have experienced a run-in with a pothole and are concerned about possible damage to your vehicle, pop in to AMS and let us take a look for you. Call us on 01934 824551 today.

Video: mechanics deliberately aiming for potholes
Scroll to top
We use cookies to ensure that we give you the best experience on our website. If you continue to use this site we will assume that you are happy with it.Ok