Recent research by an online marketplace for car repairs claims women in Britain are charged an average £45 more than men for repairs. 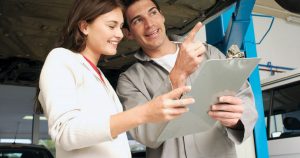 AMS was disappointed to hear new evidence that women pay more on average for the same garage repairs than men, a new study has claimed this week. At AMS we are committed to making our female customers feel comfortable and informed.

Research by a leading online marketplace for car repairs claims women in Britain are charged an average £45 more than men for repairs.

It examined independent car garages across the UK and found a standard repair costing a man £571 will typically cost a woman £616 – an increase of eight per cent.

Male and female mystery shoppers requested quotes to replace the clutch of a 2011 Ford Focus from 182 garages across ten UK cities as part of the investigation.

It found that eight out of the ten cities charged women a ‘female premium’ and only 6% of the surveyed garages gave a consistent quote to both male and female customers.

Birmingham repair garages charged the highest female premium – with women charged £582 in comparison to £445 for a man.

Only two out of the ten surveyed cities bucked the trend and charged men more for a repair, with Sheffield and Edinburgh garages quoting males 5% and 19% more than females respectively.

If you would like to visit a garage that understands the importance of treating our customers with respect then contact AMS today on 01934 824551 to discuss your vehicle.

Trust your AMS MOT to keep your family safe

Would you drive the wrong way up a motorway slip road?
Scroll to top
We use cookies to ensure that we give you the best experience on our website. If you continue to use this site we will assume that you are happy with it.Ok