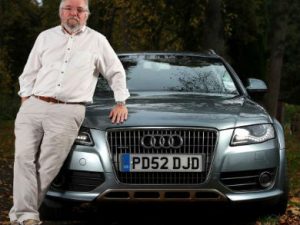 David Davis of Worcester took his Audi A4 Allroad into his local Kwik Fit branch simply for a new tyre but the ‘technicians’ managed to damage the vehicle’s nearside wheelarch.

David said: “I was contacted and told the car had been damaged, but that Kwik Fit was going to have it repaired.

“And, as a gesture of goodwill, they also promised to clear up some of the scratches on the rear offside wheelarch.

A few days on, David collected his vehicle but was disgusted with the standard of work.

He added: “The finish was poor – the colour didn’t even match the rest of the car.”

Kwik Fit then agreed to take the car to a local bodyshop to have the damage fixed, leaving David without a car yet again.

Unbelievably, the second repair was also found to be unsatisfactory.

David said: “When I checked it I pointed out to Kwik Fit’s staff that the poor finish was still visible on the repair.

“My [Audi main] dealer told me the standard of work would be absolutely unacceptable as an output from its shop.”

Worryingly, Kwik Fit then said it had done more than was required and refused to pay for an Audi respray. Following further complaints it has now agreed to undertake a final inspection.

Only an independent garage like AMS ensures that our mechanics represent the values that we hold to be important. Put simply, we take the care of your car very seriously, and treat it even more carefully than we would our own vehicles.

Around 50% of drivers put off garage visits, Ombudsman reports

RAC patrols told customers with good batteries to get a replacement
Scroll to top
We use cookies to ensure that we give you the best experience on our website. If you continue to use this site we will assume that you are happy with it.Ok