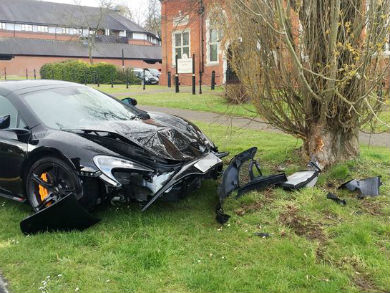 The McLaren 650S can cost more than £215k new and is capable of 0-62mph in just three seconds before then achieving a top speed of 204mph.

Jubilation following the arrival of a brand new McLaren 650S were short-lived last week after the 204mph car was left in pieces on a grass verge just minutes after the excited new owner took delivery of it at his home.

Neighbours said they saw the owner with a bottle of champagne as the car was being offloaded for delivery just before the crash.

It appears a red-faced motorist lost control of the McLaren and smashed straight into a tree in Essex.

Essex police have appealed for information and say enquiries are ongoing to determine who was operating the car at the time.

It comes as a report by car-crash management firm Accident Exchange showed that almost a third of vehicle owners are involved in a crash in their brand new car within just 60 days of ownership.

The research suggests that the average cost of accident repairs is £2,050 – a snip compared to what the repair bill is likely to be for this McLaren.

The top 10 cheapest new cars to insure
Scroll to top
We use cookies to ensure that we give you the best experience on our website. If you continue to use this site we will assume that you are happy with it.Ok