More than a third of the 61,000 people that took part in the Auto Express survey say dealers didn’t find the fault. 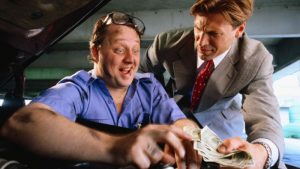 The findings have been revealed in the Driver Power 2015 study, which found that fault-finding was the biggest issue amongst 22 of the 31 dealer networks rated.

More than one in five respondents had cause to complain to their dealer, with just 30 per cent saying they were happy with the response.

Just over 25 per cent said they only use the main dealer because they had bought their car from there.

Some drivers said that they have never had their car serviced or repaired and just three per cent work on their own car at home.

Dealers were polled in seven separate categories, including how helpful staff were, how clean the showroom appeared and the standard of work.

If you would like to visit a garage that understands the importance of retaining our customers by offering great service and great value then contact AMS today on 01934 824551 to discuss your vehicle.

Get ready for the school run with a Good Garage Scheme check
Scroll to top
We use cookies to ensure that we give you the best experience on our website. If you continue to use this site we will assume that you are happy with it.Ok